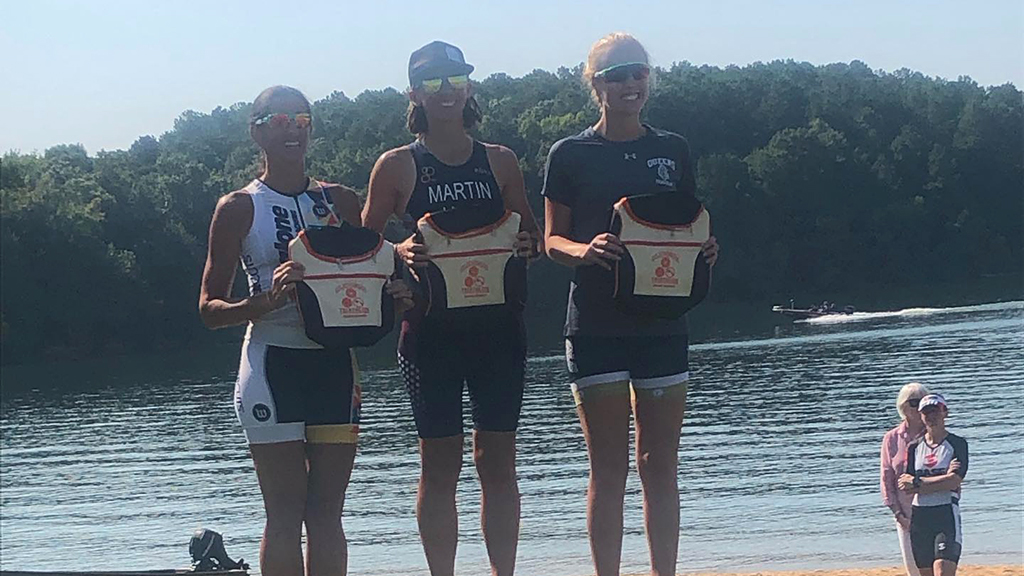 The first half of July was focused on getting some good training in after a challenging endurance camp with TriMarni in Greenville, SC. The South Carolina heat was in full effect – the thermometer temperature was always in the 90s with a feel-like temperature in the triple digits! I made sure to treat myself right by fueling and hydrating properly for every workout, and recovering in the air conditioning whenever possible. I’ve also started running laps in my neighborhood so that I can pass by my house to pick up an ice cold water bottle to dump on my head. This was a suggestion from my coach. So simple, but silly me had never thought of it before!

The end of the month had races in the calendar – Tri the Swamp Rabbit on July 20th and the Clemson Triathlon the following weekend. I wanted to get back out there racing in the lead up to the USA Triathlon Age Group Nationals on August 10th, and ITU World Championships on September 1st. Here’s a quick run down of both races.

This sprint triathlon takes place on and around the campus of Furman University, which I was excited about since our training camp was in exactly the same place. I felt pretty prepared after swimming in that pool, riding those roads, and running those paths for 5 days at the end of June. I drove up the night before and stayed with my coaches, who live just a few minutes away. That meant an easy, 5 minute drive over to the venue at 5:30am on race morning.

The swim is 250yds in the Furman pool and we were seeded according to our average 100yd time that we self-submitted. That put me in the 10th spot, the 4th female. It was a quick start, and by the 75yd mark, I passed a female competitor in front of me at the wall. Within 50yds of that, I practically swam over the top of another female competitor in front of me. 250yds completed in 3:59, 2nd female into T1.

In T1, the two competitors I passed were right on my toes so I made it quick and blasted off on the bike. I caught the other female competitor in front of me within the first mile. For the next 10 miles or so of the 16.5 mile bike course, my two pool buddies and I were leapfrogging between the first, second, and third position. They pulled away from me in the last couple of miles so I came off the bike and into T2 in 3rd place. 16.5 miles on the bike completed in 46:25, 21.4mph average.

Running out of T2, I ran down the steep, grassy hill. I was cutting a diagonal line when a volunteer redirected me down a straighter path, which had me jumping over a curve. Well, in the confusion and with my glasses steamed up, I didn’t pick up my feet properly and tripped over the curb. I landed on my right side, and skinned my knee and my hand. I jumped up quickly and kept going. I didn’t know if my knee was bleeding or not (leave that until I finish) but the scrape on my hand was sore. I stayed focused on my run – form over force is my mantra right now. I had no idea if anyone was coming up behind me, but after a few turns, I could see 2nd place up ahead. It looked like I was gaining on her, but the distance was great enough that I couldn’t just sprint it out in case I blew up. 1st place was way too far up the road to catch. At the turn around, I saw 4th place behind me, but it looked like I had a big enough gap to hold her off. My entire concentration was to keep my run within myself and run the best I could. I made the pass from 3rd to 2nd place at mile 2.65. Less than a mile to go… At the final chute with only 0.1 to go, a friend told me that 3rd place was coming up on me fast so I ran as hard as I could up that hill and fell over the finish line with dry heaves. Final run time of 24:14, 7:48/mi pace. 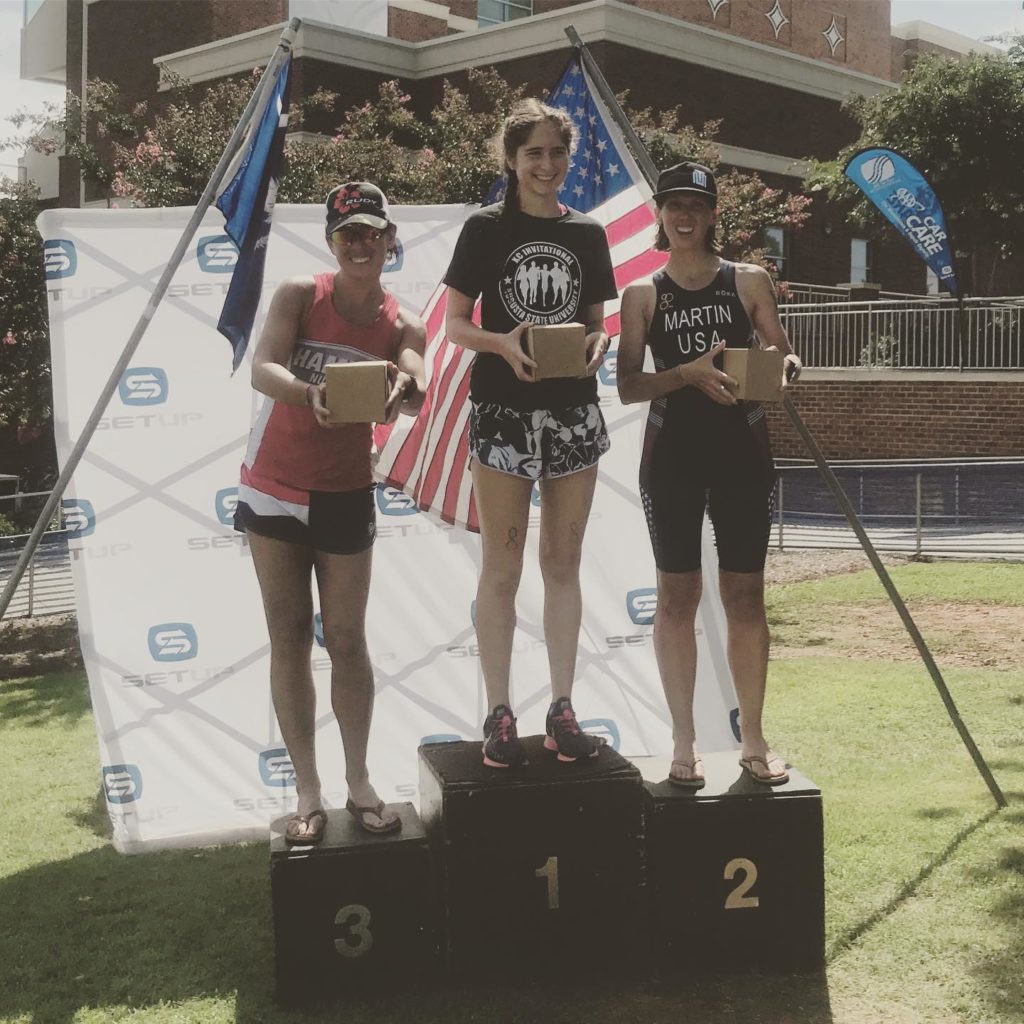 My overall final time was 1:15:51:0, good for 2nd open female and 2nd overall female. 3rd place came in behind me with only a 0.3 second difference – talk about close! I guess that little kick at the end made a difference. See overall results here.

Just one week after Tri the Swamp Rabbit, the Clemson Triathlon was next on deck. This one was exciting for me for a few reasons. First, even though it’s one of the longest running triathlons in the state, I’d never raced it before. Second, it was a sprinternational – longer than a sprint but not as long as an Olympic distance. And third, it was designated the USAT State Championship race! That was a last minute announcement so it was an extra bonus for a race I was already signed up for.

I drove up the day before and stayed at the cheapest place I could find, the Days Inn. The room was fine. The bikers revving their Harleys and blaring music at 2am was not. The 4:30am alarm was not fun, but once I get my breakfast in me and a cup of coffee, I’m ready to roll. I was at the race site by 5:30am and managed to set up, get a warm up run in, and a warm up swim before the 7am start.

A couple things to note – the distance from transition to the bike mount line was FAR. Like a quarter mile far, and over a couple of sections of rough gravel. Usually I put my bike shoes on in T1 and run to the mount line, but I didn’t want to run that far in cleats so my plan was to carry my shoes with me, run barefoot, then put the shoes on at the mount line. The race organizer did say people could run in shoes or flip flops and leave them at the mount line. That just sounded like too much fuss. The air temp was cooler – 65F – while the lake was in the 80s so I stayed in the water after my swim warm up so I wouldn’t get too cold. It was nice that the 3 week heat wave broke the week previously so these cooler temps were welcomed! 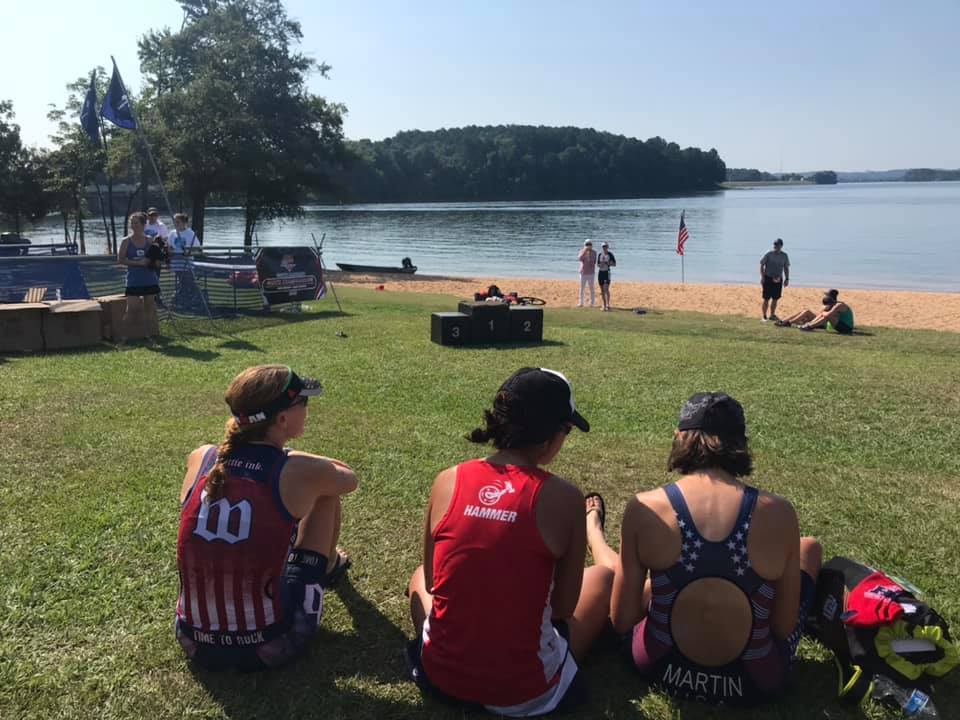 Competing in the open female category, we were the first wave to set off at 7am, along with open men, and open masters male and female. At the sound of the air horn, it was a mad sprint to the right of me. I had lined up further to the left than many of the other competitors. It looked like the straightest line to the first buoy to me, and it kept me away from that crazy, thrashing pack. A lead group formed and put some distance on me between the start and the first turn buoy. It was a 1000m lake swim in the shape of a diamond, roughly 250m between each buoy. When I turned at the first buoy, the lead group just seemed to disappear. Not like they were way far ahead, but that they all slowed down and broke up. I concentrated on taking the straightest line while other people were swimming way off to the left and right. I’ll never understand that – what’s the point in being fast if you’re not taking the most direct route around the course? I held my course and paced off of a male swimmer that I knew. We got out of the water together, and as usual, I had no idea what position I was in going into T1. Looking at the times now, I finished the swim in 17:42 and was the 2nd female out of the water.

My time in T1 was quick. The run from T1 to the mount line was LONG. The gravel felt pretty horrible on my feet, and bouncing the bike over those big stones did not feel good. At the mount line, I put on my shoes and set off on the 2 loop, 21 mile bike course. This was all new to me. I expected hills since we were in Clemson, and I was told the pavement wasn’t great, both accurate descriptions of the course. I passed the 1st place woman at about mile 6. It was obvious that she wasn’t a strong cyclist so I didn’t expect to see her again. After the first loop, I knew what to expect with the second one so I just put my head down and rode the best I could. There were more athletes on the course for the second loop so lots of legal passing to avoid a drafting penalty. The USAT refs were out on course and taking note since it was a State Championship race. I was passed by a few age group men by the end, but I didn’t see any other females. I did a flying dismount and ran to T2 barefoot again. The second time was much worse than the first time. I was happy to be back on the grass at T2 and able to put shoes on. I finished the bike in 1:05:22 in first place.

Coming out of T2, I saw one of my competitors coming off the bike so no slacking on this run. I honestly didn’t know what position I was in. Lots of people were cheering me on and telling me I was doing great, but no one was telling me if I was 1st, 2nd, or 3rd female. The 3.8 mile run is a single out and back so I was watching all of the people heading back to the finish line as I was heading out to see if I could spot a female. I didn’t know what to expect from the run so after passing the mile 1 water spot, the massive hill in front of me was a surprise. Luckily, we’d done hill repeats on similar sized hills during training camp so I told myself “just do what you did at camp” and that got me up the hill without blowing up. Then it was out on a trail across a dyke to the turn around. Closer and closer I got to the turn around and still didn’t see any women. Then I realized I was in first! After the turnaround, I saw 2nd place female and told her to keep it up since we were in first and second. Third place was on her toes and running strong. I had a decent gap on both of them. My only job now was to continue to run well and not blow up. I’m happy to report that I managed that and came in 1st place! I finished the run in 29:47.8, 50 seconds up on 2nd place. 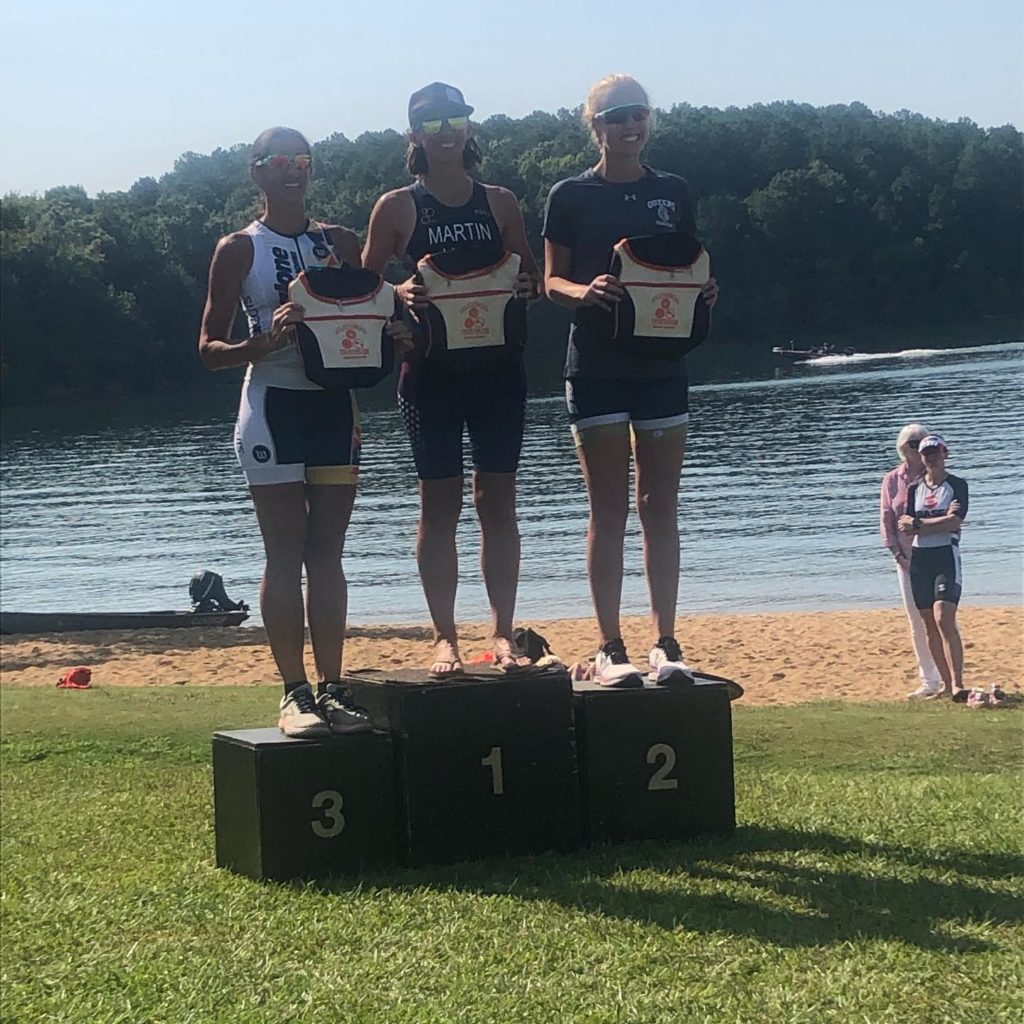 With this being a State Championship race, the top 3 overall winners were to be awarded State Championship titles. Even though I finished first, I knew there would be a chance that an age group female, who finished after me, could have a faster time and get the title. Well, that’s what happened in this case. A fellow Team USA member finished 1min 30sec faster than me and got the Age Group State Champ title, I got runner up. I’m still super happy with my race and results. That was the first time I’ve been announced as the first female finisher so that was a great feeling. After the race, I found out that one of my competitors had crashed on the bike course and was in the ambulance with a possible broken elbow. Luckily, it wasn’t broken, but I hate that her race ended that way. You can find full results here. 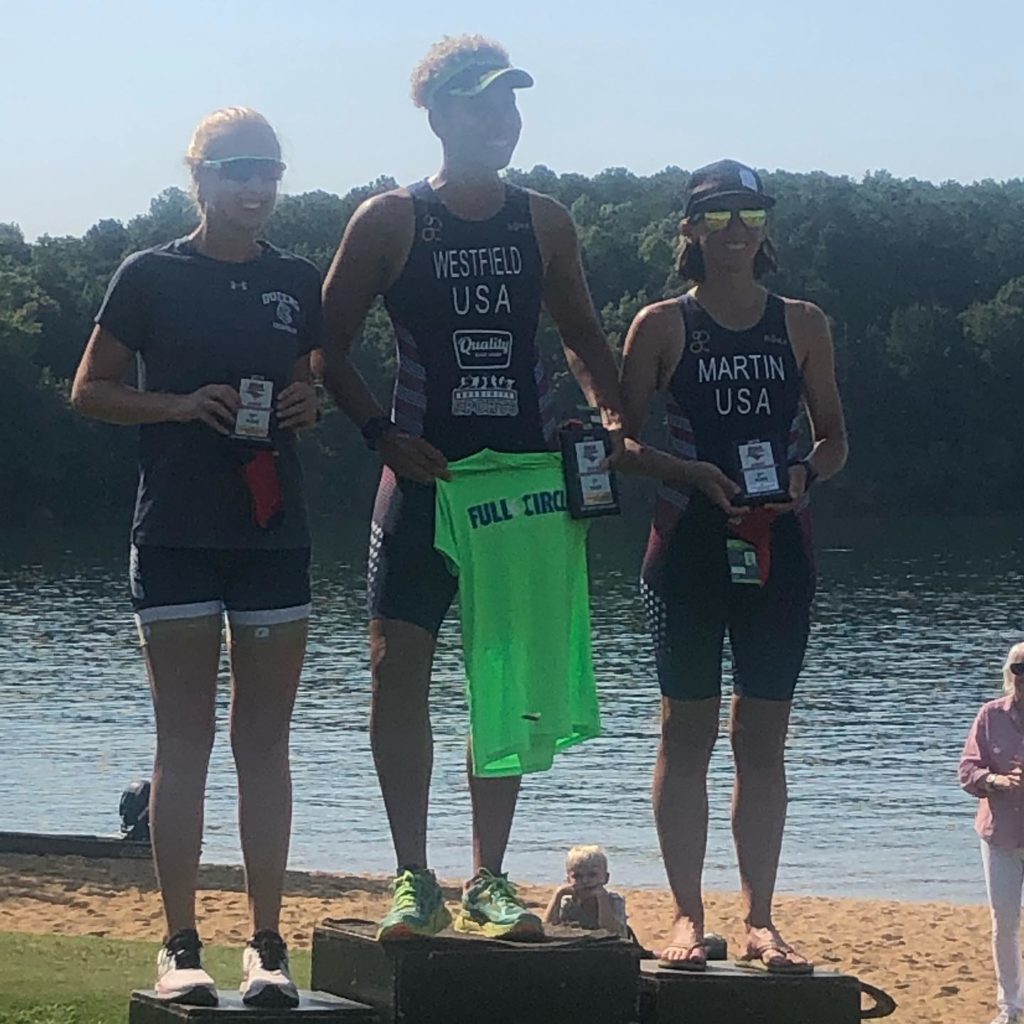 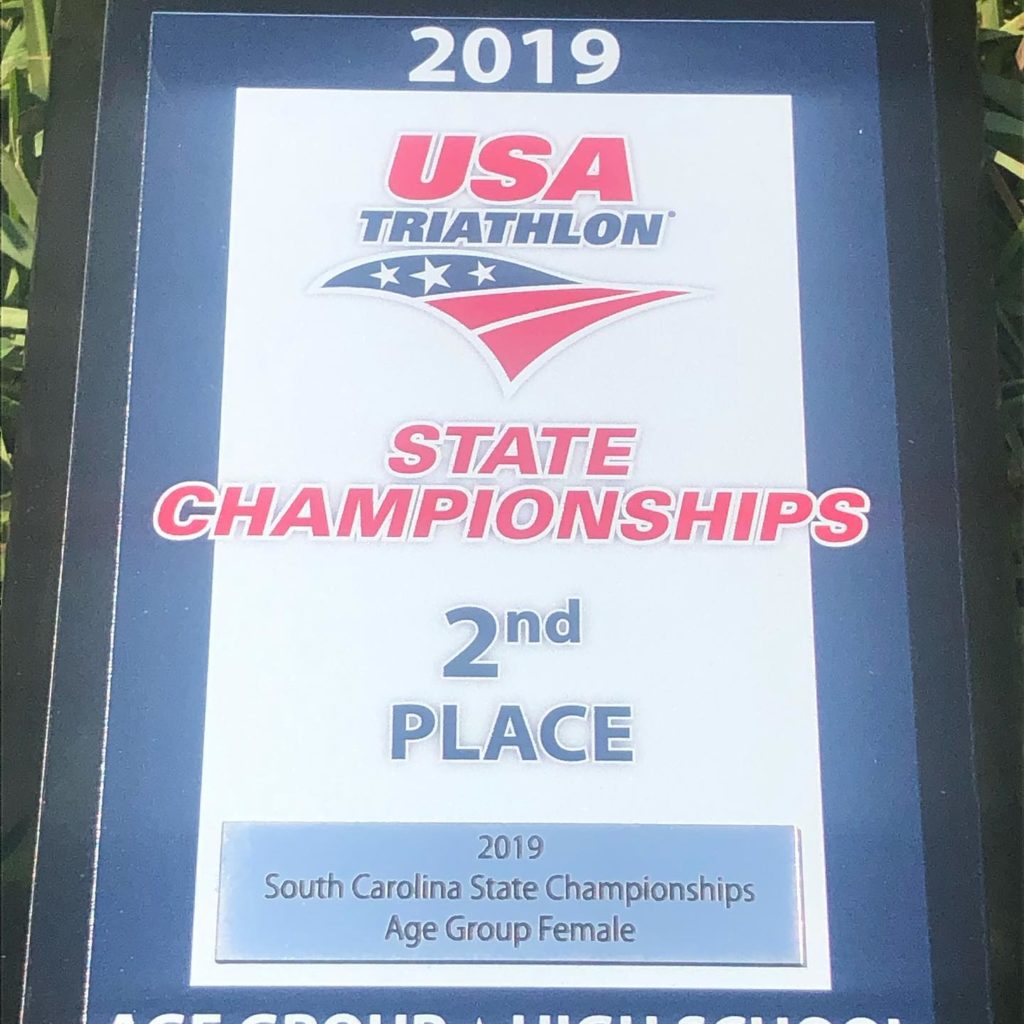