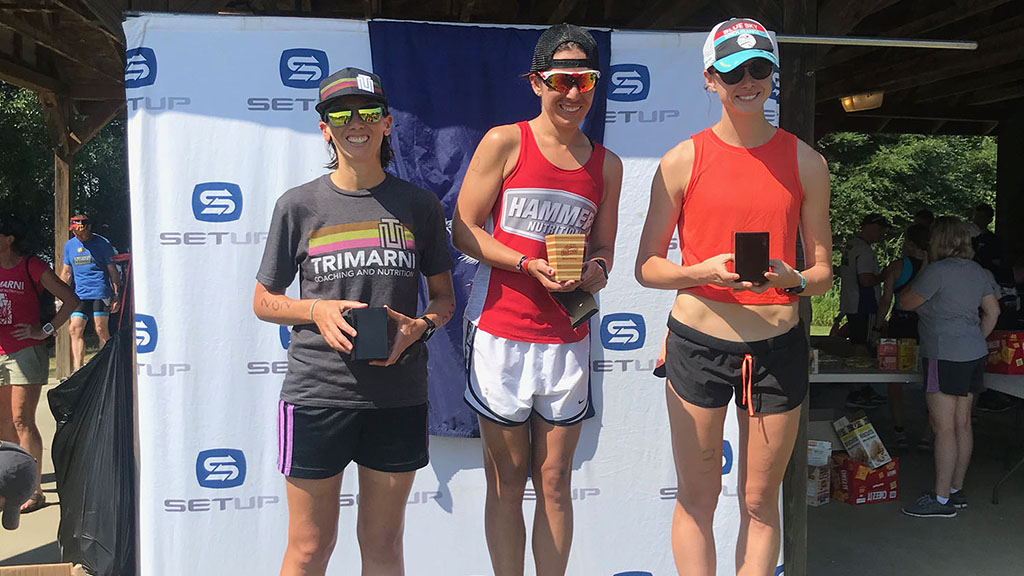 We’ll make this a short race recap for a short race. The Lake Murray Triathlon, a sprint distance triathlon in the South Carolina Triathlon Series (SCTS), came 6 days after my race at IRONMAN Chattanooga 70.3. This is a local race of sorts – it’s only an hour’s drive from my house. I’ve raced this course every year since 2014, except for last year when I was sick. I was looking forward to doing it this year, and catching up with all of my SCTS friends. I had no expectations going into this race – this is not a priority race in the calendar, and I didn’t know how my body would feel after putting in a good effort at Chattanooga 6 days before. I had recovered well during the week, and was in a very calm and relaxed state of mind leading up to the race.

I arrived at the race venue at Dreher Island State Park around 6:15am, plenty of time to get to packet pick up, set up my transition, and do a run and swim warm up before the race start at 8am. For the SCTS events, I race in the open category, which had us starting in the first wave of athletes. The open female field can be small at times – sometimes there’s only 3 or 4 of us – but this year we 7 whole open female competitors!

Close to 8am, they called up the open wave to get lined up for our in-water start. We tread water for probably 2 minutes before the blast of the air horn to signal the start. I wanted a fast start, but I was also lined up right behind some big dudes who moved in front of me right before the air horn blast. I had no interest in swimming hard into their kicking feet so I pushed on but not at a “blast”. The lead group of guys split off and continued towards the 1st buoy in a 2 buoy turn course. From what I could tell, I was swimming by myself, but there could have been people drafting off of me. Everything was going well to the first buoy at 250m, then we took a left turn right into the sun.

The next turn buoy was yellow and impossible to see with the sun in our eyes and reflecting off the water. I’m usually pretty good at sighting, but I sat up 3 different times in that 250m to try to get my eye on the buoy. In the meantime, I had to do something that I don’t like – I followed the swimmers in front of me. I could see the lead pack about 25yds ahead of me, and I had to sight off of them for direction. I felt like there was a possibility that they were going wide, and on the third time that I sat up to see the buoy, my suspicions were confirmed. So thankful to finally see the buoy, I corrected my course and put down some power.

Left turn at the 2nd turn buoy and it was 250m back to the boat ramp to finish the swim. Two guys from the age group wave passed me right at the end, but no one else passed me during the swim. Swim time of 13:26.

With the water being warm, I only had to get my swim skin off in T1. That was pretty fast, and I had my aero helmet + shield and shoes on in no time. I had no idea where I was placed because I was racked with the other folks who signed up last minute and not on the same rack as my competitors. T1 time of 45 seconds.

For the 16 mile bike, my strategy was to go hard the entire time. 16 miles is nothing compared to the 56 miles I did in Chattanooga only a week before. I was hoping for a faster average speed (21.4mph average at Chattanooga) and something close to 40 minutes for the split. I passed one woman in the first 5 miles, and I was passed by maybe 4 or 5 guys total for the whole ride. Otherwise, I was on my own and chugging on.

Coming to the dismount line, I was suddenly swarmed by 6 guys all finishing at the same time as me. I did a successful flying dismount, and crossed the timing mat with a bike split of 45:12, 21.2mph average.

I made quick business in T2 by putting on my race belt, shoes (no socks), and sunglasses. I chose not to wear a hat since the run course is mostly in the shade, and I could dump the water directly on my head without slowing down to remove a hat. I grabbed my cooling gaiter and put that on as I ran out of transition.

I still didn’t know what place I was in, but the run course has a few out and backs so I knew I’d find out soon. My friend Jen came running by me in the first quarter mile. She must have finished the bike right after me, and her run splits are a minute a mile faster than mine so I knew I’d have to let her go. At the first turn around, I could see there was one woman in front of Jen, and I was in 3rd place. I focused on running strong, and didn’t look at my watch for my pace.

Just after the 2nd mile marker, people started telling me I could catch 2nd place. I initially thought they were talking about Jen, but at the second out and back, I saw that Jen had passed the other woman and was in 1st place. I had a decent gap to 4th place as long as I kept running strong. At the urging of more than one spectator and racer telling me that 2nd place was moving backwards, I tried to pick it up a bit, but that jacked up my heart rate over 200bpm, which makes me nauseous. I had to walk twice for 10 seconds each time in the last mile at the points were I tried to pick it up.

In the last few turns to the finish, I could see 2nd place and I was running faster and stronger than her, but I ran out of real estate and finished 10 seconds behind her. Final run split of 23:21, total time 1:23:34. The placing didn’t matter so much. I just would love to be able to run someone down!

In conclusion, I was pleasantly surprised to have a good sprint distance race after focusing all year on long course racing. I can still run fast-ish (7:31/mi pace) in a short race, and I can run someone down, if I keep at it! I had hoped for a faster bike split, but that’s likely fatigue from Chattanooga taking some of the sprint-iness out of my legs. My final time was a 4 minute improvement from my 2016 race. See the women’s results here.