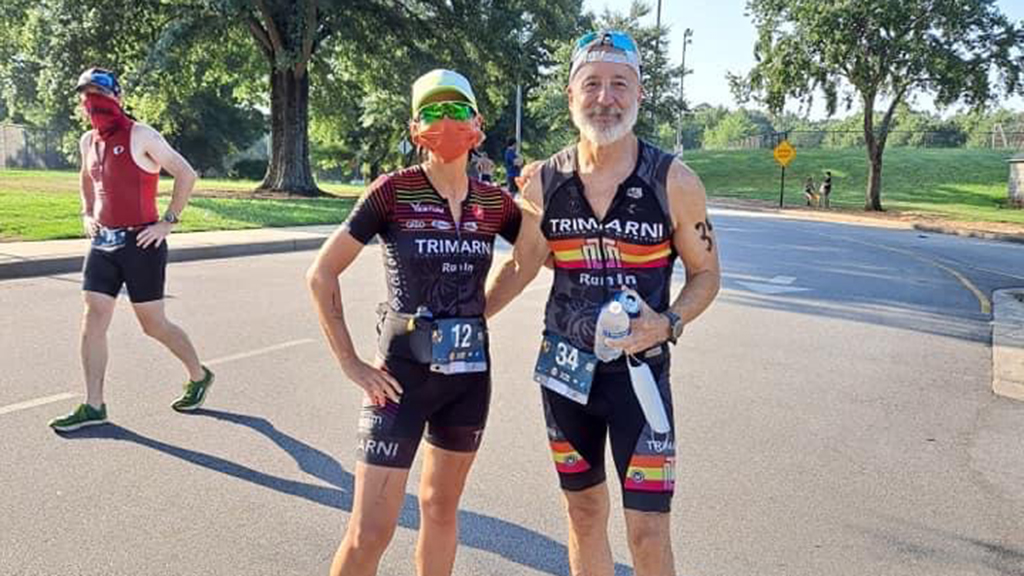 It’s my first triathlon of 2020 and it’s August! So much has changed in 2020 due to COVID-19. Just about every race has been cancelled. My big races for the year - Chattanooga 70.3, Blue Ridge 70.3, and IRONMAN Lake Placid - have all been cancelled and deferred to 2021. It’s understandable - IRONMAN races regularly draw 3000 participants and although IRONMAN tried to put COVID safety measures in place, not many venues were willing to take a chance with hosting an event of that size.

But, if you’re looking for a silver lining, smaller events, like local sprint and Olympic distance triathlons, might be able to pull off a COVID-safe event with the approval of local race venues and regulations in place. This was the case with Andy’s Race, formerly known as the Greenville Triathlon, a sprint tri centered around the Westside Aquatic Center (aka Greenville County Aquatic Complex) and put on by the always amazing South Carolina Triathlon Series.

COVID precautions for this race included:

Packet pick up on Saturday went well. I didn’t know if we’d end up in a long line of cars or if it would go quickly, but the volunteers did a fantastic job of keeping it moving and it took me a total of 15 minutes.

On race morning, my alarm went off at 4:30am. I had a breakfast of overnight oats and a banana. I knew I needed to eat something, but being a shorter distance sprint, I wasn’t particularly worried about the pre-race fueling like I would be for a long distance event. I had made two bottles the night before - one with NBS hydration (POG flavor) for the bike, and one 10oz Nathan bottle of NBS hydration (women’s pineapple formula) for the run. I packed up my stuff and headed out the door by 5:15, aiming for a 5:30am arrival at the venue.

When I arrived at the Greenville County Aquatic Complex, I was early enough to get a good parking spot, pump up my tires, and gather my stuff without too much fuss. The bike racks were first come, first served instead of numbered, and I found a rack and grabbed the outside position near the main aisle, about 6 racks away from the bike entrance and exit. I was happy with all of this. I wore a mask throughout, as did all other athletes, and I socially distanced while saying hi to my teammates.

The TriMarni team had a great turnout - there were 7 of us racing so it really felt like a team race!

I finished setting up my transition, made a stop at the porta-John, and then hung out at my car for a while before heading to the pool to warm up. We were allowed to warm up in the 50 meter pool between 6 and 6:45, and they kept the lanes to only a few people each. I had no problems getting in the pool around 6:15 and shared my lane with one other person. It was good to move the body and get the blood flowing before the race started.

Race start was at 7am. They wanted us to social distance in the lineup as we set off 10 seconds apart for the pool swim, but some people were just very eager to get in the pool and pushed through. I was seeded as #12 to start. I probably ended up being the 18th person in the pool as other dudes pushed up in front of me. Of course, there was at least one guy who really shouldn’t have put himself in the water with the open athletes (I passed him within the first 100 meters even though he started 5 or 6 people in front of me).

So the race was a 400 meter pool swim, 15 mile bike, and 5k run. I was competing in the open/elite division as I have done since 2017. For the pool swim, I wore my ROKA swim skin over my TriMarni one piece tri kit, and I got to wear my own Team USA swim cap and my favorite Speedo goggles. As the athletes in front of me started, some dove in and a few jumped in the pool. I decided to jump feet first because too many times my goggles have slipped down or filled with water when I dive in the pool. I know that’s a form issue, but diving is not something I practice and I sure wasn’t going to take a chance that morning.

The swim was good. I was passed by maybe 2 very fast swimmers. I passed a few guys myself, even the ever-so-fast Jeff Brandenburg 🙂 If I could improve the swim - open turns are not great for pool swims and then pushing off the wall and going under the lane line really felt like I was losing momentum every time I got to the wall. Good news is that I had a whole 50 meters to put in some strong work and catch people. I never felt like I was going too hard - maybe I should’ve gone harder for a sprint triathlon. I ended up with a swim split of 6:49, the 5th fastest female swim split and a huge improvement from the last time I did this race in 2017, with a swim split of 7:38.

My first transition was a little slower than maybe it should have been. It’s clear I haven’t done transitions in a while. First, I could not get my hands on the cord to pull down my swim skin so instead of sprinting out of the pool, I found myself jogging and fussing with that. No mishaps when it came to putting on my helmet, shoes, and unracking my bike. Jeff had sprinted by me in T1 only to have a mechanical on his way out of transition so I passed him again on my way out to the mount line. T1 was 1:11.

I hopped on my new A-Squared Speed Phreak and off I went! I didn’t remember much about the bike course from previous years except for the poor condition of the roads, and one year lots of people got flats. Half the course is on bumpy, pothole-riddled city roads (the first quarter leaving the aquatic center and the last quarter returning to it), and the other half is on quieter country roads. Overall, I managed the terrain and the bike well. I passed one female, and I was passed by 3 men (Jeff being one of them). If I knew the roads better, I think I could’ve been more aggressive in some of the turns, but I made it through the 14.36-mile course without any incidents, and took on hydration as well. My bike split came in at 42:43, 3rd fastest female and a 20.3mph average.

Rolling into T2, I chose not to do a flying dismount as I realized I haven’t practiced that in forever either. With my bike rack being so close to the entrance/exit, I don’t feel like I lost a lot of time running in my cycling shoes. I was able to get my shoes and helmet off without issue, and I donned my hat with sunglasses on top, put on my Naked Run belt, which had my race bib on it, slipped into my Skechers Razor 3 , and ran to the run exit with my hydration flask in hand, soon to be put in my run belt. T2 was 1:13.

I didn’t come out of transition with any women around me. I didn’t see any in front, but I did see Ashley Golbus roll into T2 as I was running out of transition. My goal was to run steady and strong, no blowing up in the first mile or half mile. This course I remember well as it’s 2 loops starting with a run through the parking lot, then up on a wooded trail that leads you to a loop around a neighborhood x2. The first loop seemed to take forever but I kept it controlled. Even though I had my watch on and a heart rate monitor, I didn’t have my watch beep at every mile and did this completely by feel. On the first loop, I grabbed a water bottle from the one aid station and dumped it on my head. Otherwise, I took one swig of my hydration for the rest of my run.

On the way back in from my first loop, I saw my teammate Gin running strong. I caught a glimpse of Ashley somewhere along the way as well, but I really focused on myself and what I could do. I asked myself “are you doing the best you can right now?”, and every time the answer was yes. The second loop went by much faster and I tried to enjoy every minute of it, ticking off the hills in my mind. I knew exactly where the last hill was, and that the last quarter mile or so is all downhill, but I couldn’t get too excited because the downhill was on that wooded trail and I did not want to trip and fall. So I focused on moving through that technical session, and then gave it all I had left for the last flat bit to the finish line. I finished the 2.76 mile run (by my watch) in 21:19, 8th fastest female split and a 7:42/mi average. Even more exciting, my heart rate was under control with a peak of 193bpm and an average 185bpm! 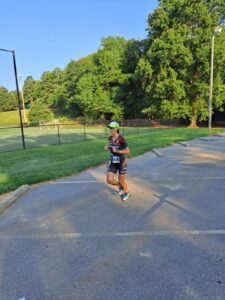 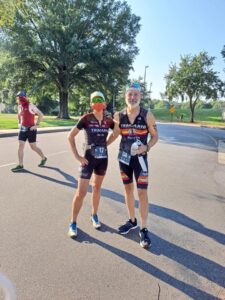 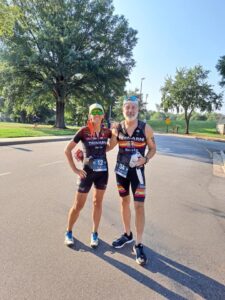 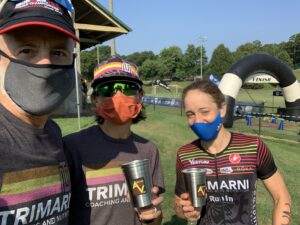 Even though I didn’t see any of my competitors out on the course, 5 of us women finished within a minute of each other, so I was very eager to see what our final finishing positions would be with the time trial start. I ended up finishing 2nd open female and 3rd female overall. My teammate Gin was the first female overall, and the TriMarni team did awesome all round! Teammates Reid Thomas, William Wood, and Gin Fleming won their age groups, and Meredith Rigdon, Yannick Fischbach, Alvaro Velez, and I got 2nd in our divisions.

Thanks to South Carolina Triathlon Series and the Greenville County Aquatic Complex for putting on this race. I forget how much I loved racing and seeing my friends. So much so that a few of us are signed up for the Tugaloo Olympic triathlon in Georgia in a few weeks, and I’ve signed up for a 10-mile trail run this weekend. It’s a late start to the season, but I’m grateful for every chance I get to move my body and socialize with friends.